The manorial chapel, dedicated to St Anne the mother of the Virgin Mary, survives as a remnant of the medieval manor. Here the Seigneur and his household began each day with Mass. The chapel, desecrated by parliamentary forces following the Civil War, had been used subsequently as a farm outbuilding and hayloft. The chapel was “reconciled, cleansed and sanctified” in a service of Rededication on the 5th May 1914 by the Bishop of Winchester. A further rededication by his successor was required following the Occupation of the Island by German Forces as the manor had been requisitioned and the chapel used as a store.

The chapel contains six small Bosdet windows portraying scenes from the legend of St.Anne, and were commissioned in 1912 by Col. Edward Charles Malet de Carteret, the great-great-grandfather of the present Seigneur, as part of the major refurbishment of the manor. 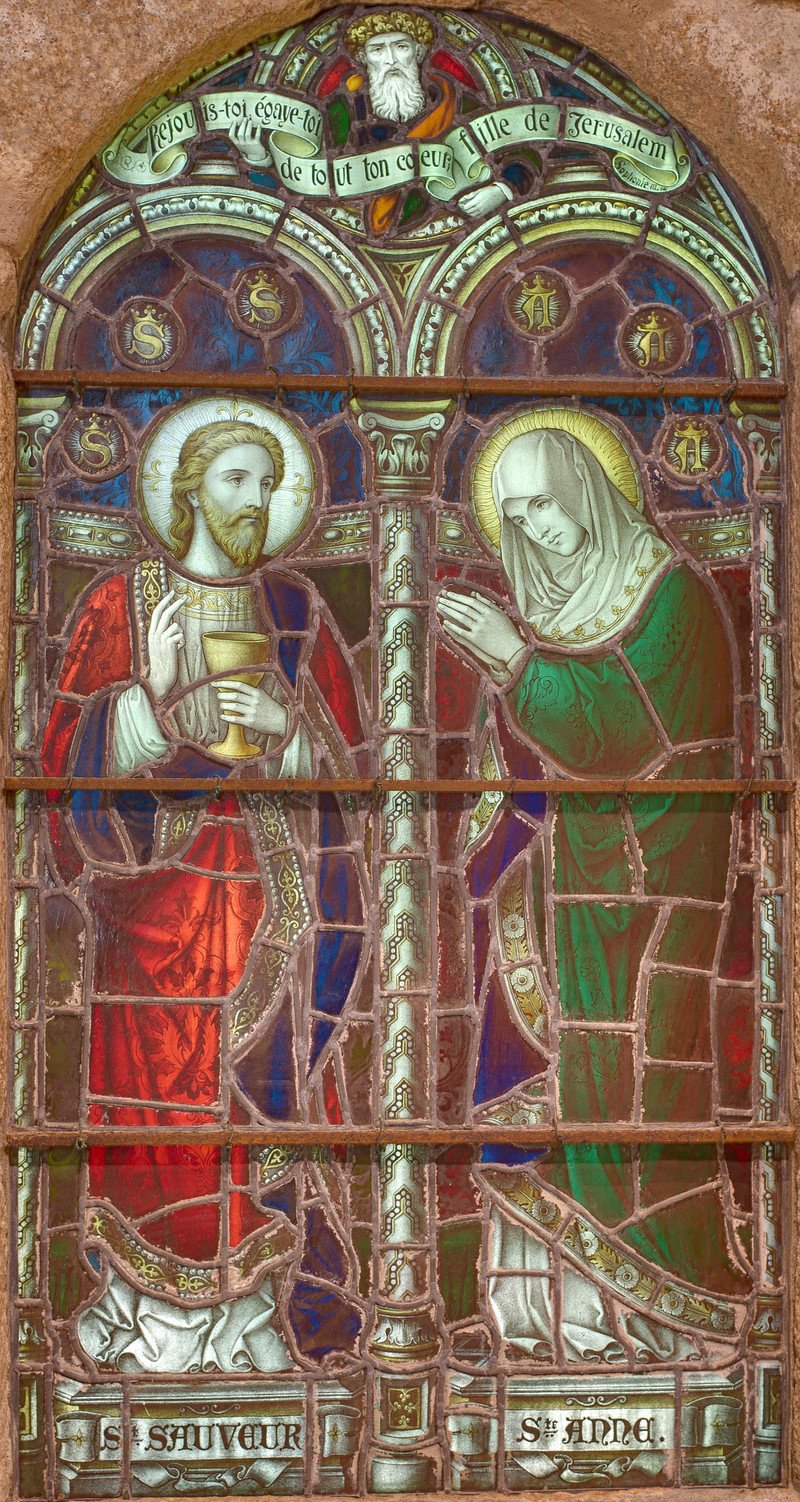 A single window in a Norman arch, depicting Christ the Saviour holding a chalice and St Anne, mother of the Virgin Mary, turned towards her grandson with hands joined in prayer. Her head is beautifully drawn and her robes are in a striking combination of apple green and dark blue.The head of each figure is surrounded by medallions with identifying initials: S for St Sauveur and A for St Anne. Above them is the half figure of the prophet Zephaniah, wearing a crown of yellow leaves and holding a long scroll bearing the words from his own writings: “Réjouis-toi, égaye-toi de tout ton coeur, fille de Jerusalem” Sophonie 3, v.14.

What we know about the life of St Anne and her husband Joachim comes from the Protoevangelium of St James the Less, an early writing which is not part of the bible and is therefore considered as legend. St Anne is venerated and loved in Brittany and she is the patron saint of that part of France. Her great shrine is at Auray and her feast day is 26th July. Her help is particularly solicited by childless couples and by young women in search of a husband.

Position: East wall, behind the altar

A small rectangular window. St Anne is seated on a formal stone throne, classical in its simplicity. The stone is pale green and the back of the chair, in cream stone, rises up to frame the saint’s head and rich red halo. Stylised trees behind her and a paved foreground indicate a garden. St Anne is disconsolate because of her childless state, her eyes are downcast and her hands joined together on one side of her lap. Her robe is deep red, a colour often used to symbolise love and the green of her brocade cloak, patterned with the Gothic letter A, symbolises spring, rebirth and hope. Beneath are the words: “Ste Anne pleure dans le jardin”.

This is a restrained composition in tones of red and green, with touches of turquoise and blue. The whole is framed in a delicate border of golden foliage.

Position: North wall, to the left of the altar

A small, narrow window in a rounded arch. In the foreground, Joachim, Anne’s husband, comes to the Temple bearing his offering of a lamb. Behind him, to the right, St Anne waits, her hands joined in prayer. Above them, towers the High Priest wearing the breastplate with twelve precious stones, each representing one of the twelve tribes of Israel. With him stand other characters in medieval costume and a woman bearing a lidded dish in gold. The High Priest’s look is severe and his left hand is raised in dismissal. Behind the group, Jerusalem is represented by a large classical archway.

According to the legend of St Anne, her husband’s offering at the Temple was rejected by the priest because, after many years of marriage, Joachim had fathered no children for the nation of Israel and was therefore considered unworthy. Joachim fled in shame to the desert where he prayed and fasted for forty days and nights. For her part, Anne hid away ashamed, reproaching herself for her childlessness and anxious about her beloved Joachim.

A narrow window in a round arched aperture. St Anne, in a richly decorated cloak with dark blue lining and an olive green dress, listens to the reassuring message of the angel who, according to the legend of St Anne, is telling her that she will have a child to be named Mary. The angel, floating on a cloud, has bright red wings and his hand is raised in greeting. Behind them, conifers fill the skyline and roses grow in profusion around Anne and the angel. The space above is filled with a decorative panel of delicate arabesques of foliage. 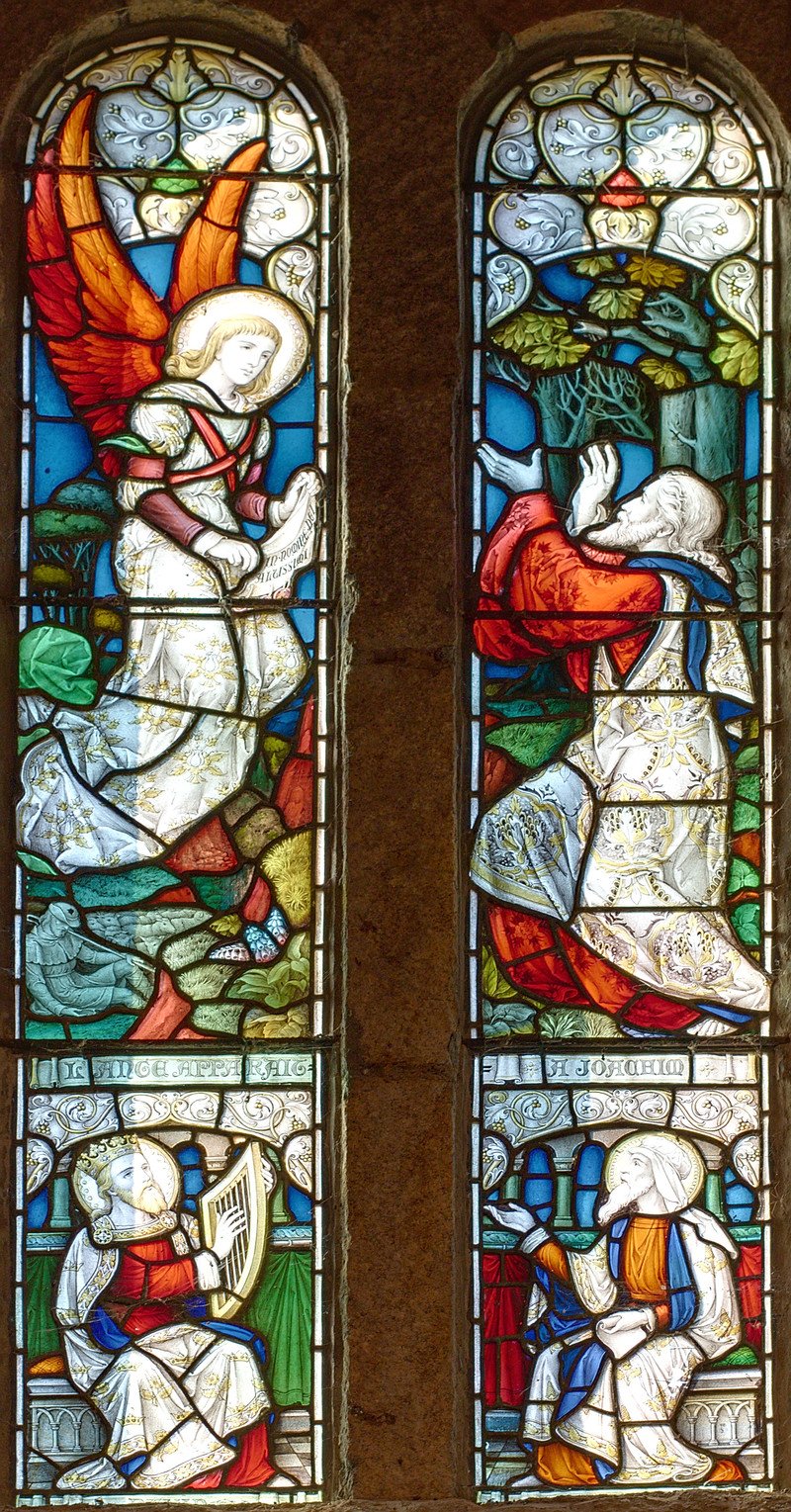 A window of two narrow lights in rounded arches. In the left-hand panel, an angel with bright red wings bears a scroll with the words: “In nomine Dei altissimi” (In the name of the most high God). He tells Joachim to leave his flocks and return to the Golden Gate of the Temple where he will meet his wife Anne. He reassures Joachim that his childless days are over and that Anne will conceive a child. Beneath the angel, in a small and delightful cameo on the left, Joachim is shown resting among his sheep, in a sylvan setting of rocks, bushes and foxgloves. In the right panel, against a background of trees and blue sky, Joachim raises his hands to the angel in wonderment and gratitude. Above each figure is a panel of arabesques of foliage.

In the lower part of each light are two smaller panels, the first showing King David playing his harp and the second depicting Abraham holding a scroll of parchment.

Position: High in the west wall

Joachim and St Anne follow the instructions given to them by the angels and they meet and embrace at the Golden Gate of the Temple. After their shame and distress at being childless, their joy is abundant. Both are in highly decorated grisaille (grey monochrome) robes with sleeves and lining in rich reds, blues and greens. Three women accompany St Anne and three of his fellow shepherds stand behind Joachim. In the background is the Golden Gate, an ornate Roman arch with gilded carvings, and the towers of several buildings, symbolising Jerusalem.

Above the figures is the decorative panel of foliage common to all the four narrow windows in the series, but this one is rendered dramatic by the deep red pomegranate in the centre of the panel.