St Ouen’s Manor is the ancestral home since Norman times of the de Carteret family and of the Island’s senior fief or seigneurie. The de Carteret family supported the Royalist cause during the Civil War and the province of New Jersey was granted by Charles II to one of its scions, George. Col. Edward Charles Malet de Carteret inherited the manor in 1856 in a ruinous state and over the course of sixty years completely refurbished, altered and extended it. The new west wing was destroyed by fire during the Occupation and was restored in the 1960s.

The manor house contains one large window recording the feats of two famous family members and a number of windows with coats of arms and heraldic devices commissioned by Col. Malet de Carteret and designed by Bosdet.

We are most grateful to the present Seigneur, Mr. Charles Malet de Carteret, a patron of the Glass Rainbow Trust, for permission to include photographs of the stained glass in the manorial chapel and in the manor house on this web site. St Ouen’s Manor is not normally accessible to the public. 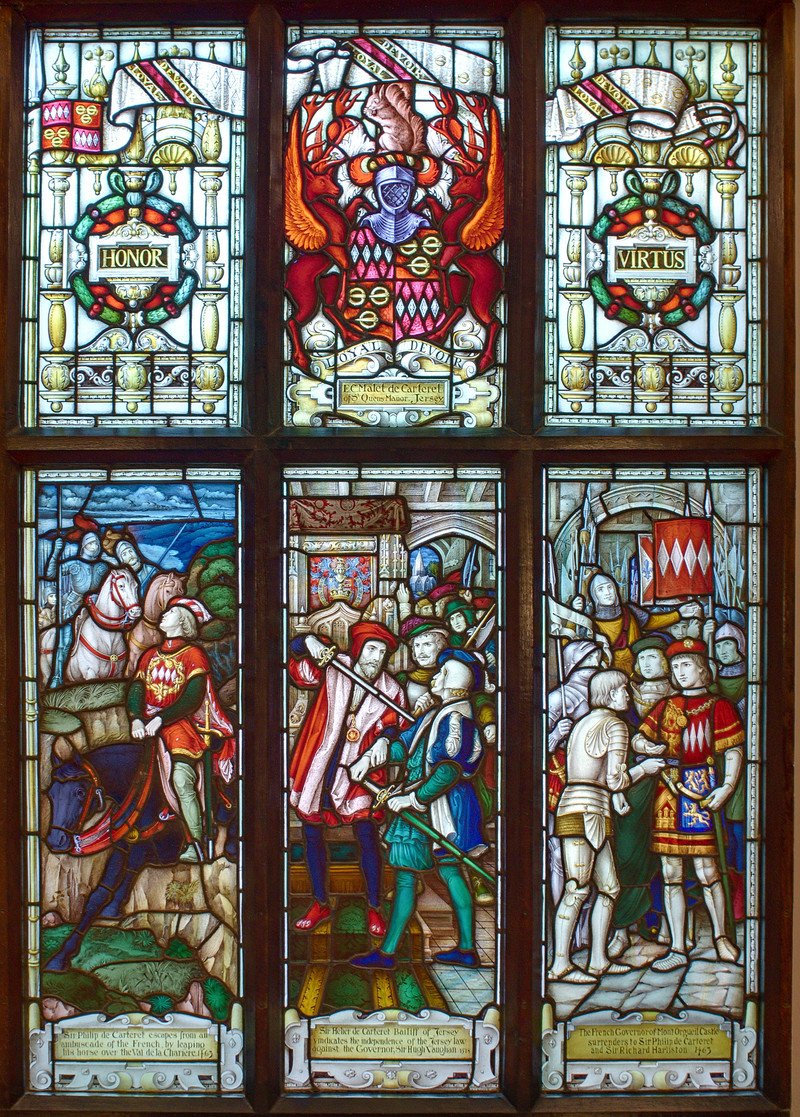 A large rectangular window in a passage opposite a panelled drawing-room.

It is divided into six panels of which the three upper ones are designed around the coat of arms of the Malet de Carteret Family. The surrounds are lavishly filled with wreaths, garlands, decorative devices and the family motto, in Latin and French, on scrolls and banners: HONOR, VIRTUS, LOYAL DEVOIR (Honour, Virtue and Loyal Duty).

Three lower panels depict incidents in the history of the Island. The centre panel shows a moment in 1518 when the Bailiff of Jersey, Sir Helier de Carteret, vindicated the independence of Jersey law against the English Governor, Sir Hugh Vaughan. This is a particularly crowded and colourful composition with many armed men surrounding the protagonists, against a background of a throne decorated with the Royal Coat of Arms. Through the open door, there is a glimpse of Grouville Parish Church viewed from Grouville Court reminding us that the Court was sitting in that Parish because the plague was raging in St Helier.

The side panels illustrate incidents during the French occupation of the Island in the middle of the fifteenth century. On the left, Sir Philip de Carteret escapes from a French ambuscade by leaping his horse over Val de la Charrière in 1463. This is a dramatic illustration of chivalrous bravery, centred on the leap of the powerful horse. The darkness of his black coat is made all the more striking by the scarlet harness. In the right-hand panel, under a Norman arch, the French Governor of Mont Orgueil Castle surrenders its key to a youthful Sir Philip de Carteret and Sir Richard Harliston in 1463. Sir Philip, very striking in a red tabard bearing his family arms, is surrounded by soldiers in armour, beneath a forest of lances, halberds and banners.

The window is signed H.T Bosdet but the accompanying date is partly obscured.

Here the glass is purely heraldic and decorative. There are four windows on the left on entry, each with an upper and lower panel. The four upper panels are of clear glass with inserts of flowers and foliage. The lower panels, also with surrounds of clear glass, depict coats of arms bearing the following names: a) St Ouen, b) Granville, c) Spencer and d) De Caux. Below these, the space is filled with elegant garlands of fruit and flowers, particularly dog roses. 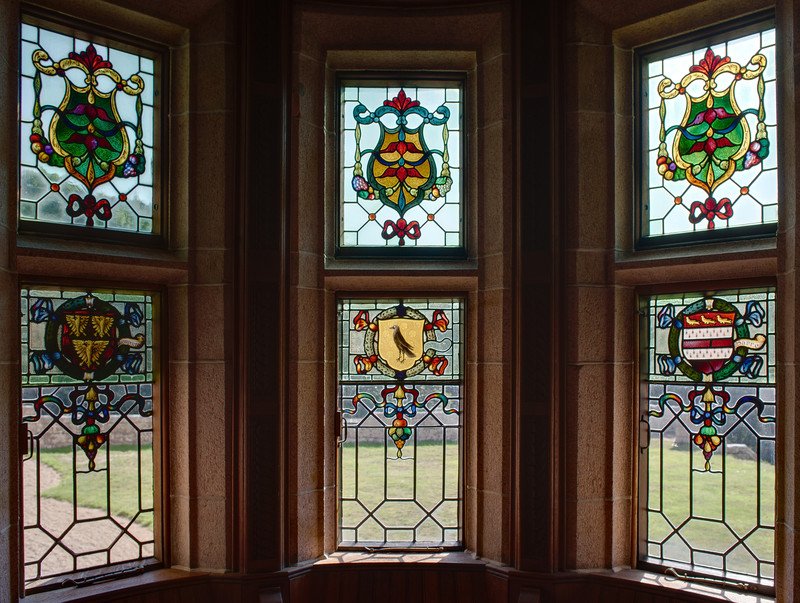 The bay window at the foot of the stairs has a similar arrangement of glass. ….The lower panels again depict coats of arms, of which the middle one bears no name but depicts a crow, emblem of the Corbet family. The other two are respectively Lemprière and Sarre.

The first landing on the stairs is lit by a tall, rectangular window of three vertical panels. The upper one depicts the date 1906 in entwined figures in the centre of a laurel wreath, surrounded by garlands of fruit and flowers. The middle panel contains the Malet de Carteret arms and motto LOYAL DEVOIR (Loyal Duty), above the name of the Seigneur, E.C. Malet de Carteret. The bottom panel repeats the charming garlands of fruit and flowers. 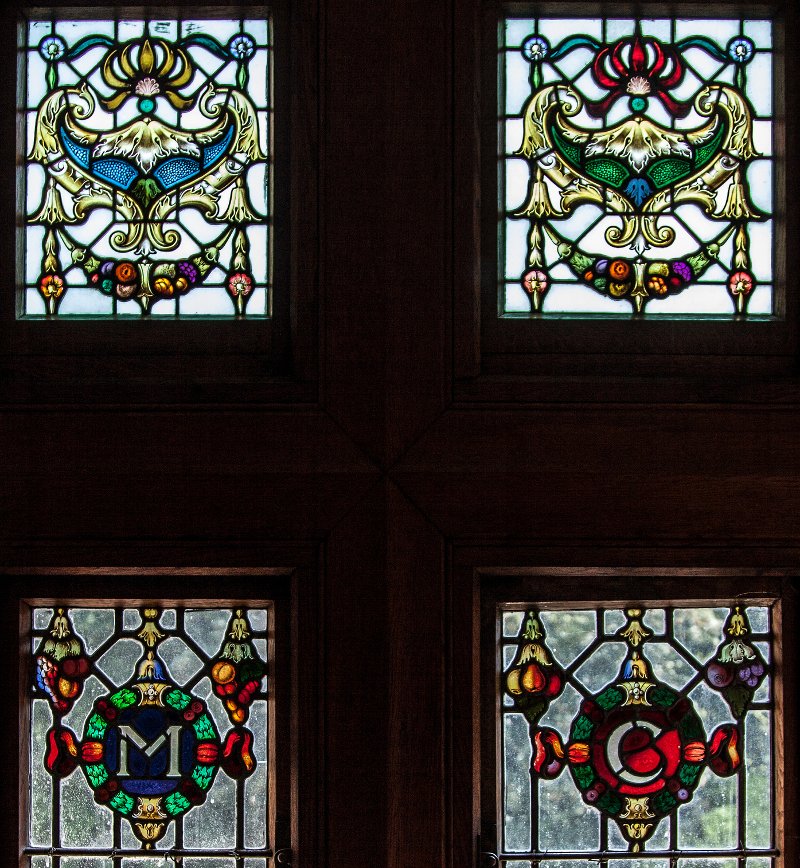 The windows on the upper landing of the stairs revert to the pattern of those on the ground floor. The four upper panels continue the theme of flowers and fruit, as do the lower ones but with the addition of large Roman capital letters in the centre of each, M and C for Malet de Carteret.

In spite of the dark panelling in the hall, the mixture of clear and coloured glass in the windows creates a luminous and airy atmosphere. The frequently repeated garlands of fruit and flowers introduce a light and festive note, a feminine touch to balance the masculine coat of arms.