One of the twelve ancient parish churches. Although known for a time as St John of the Oaks, it is more likely that since in the Middle Ages the largest fair in Jersey took place in the parish of St John on St John the Baptist’s Day, it is the Baptist to whom the church is dedicated. 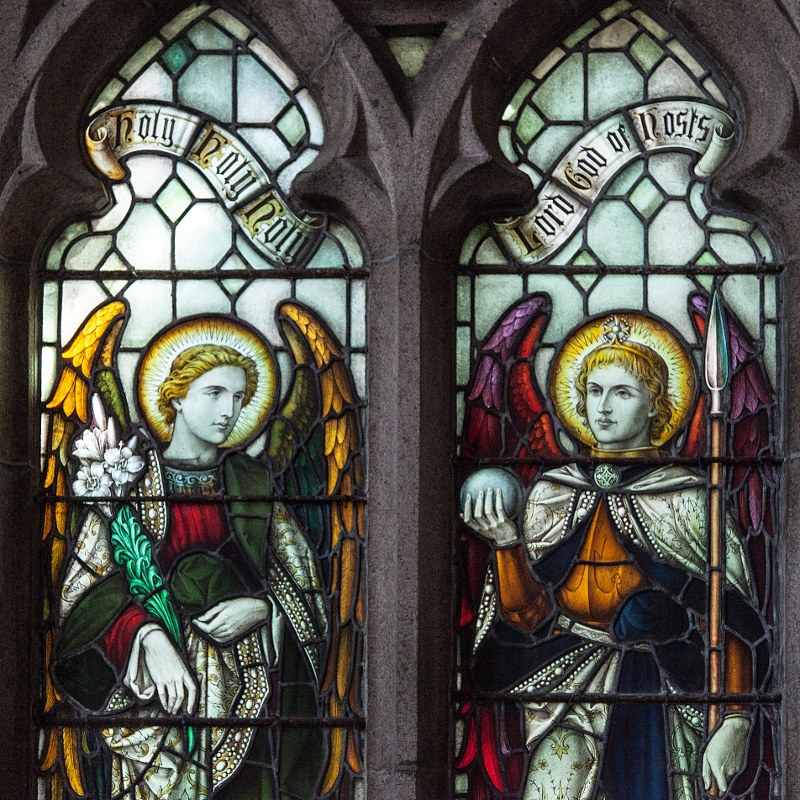 A double window with a smaller window above. The left-hand light depicts the Archangel Gabriel holding his symbolic lily. Above his head is a scroll bearing the words: “Holy, Holy, Holy”. On the right the Archangel Gabriel stands in full armour, holding a spear in his left hand. He wears a fine gold coronet around his hair and holds an orb in his right hand. Above him are the words: “Lord God of Hosts”. The dove flies above, the symbol of the Holy Spirit. 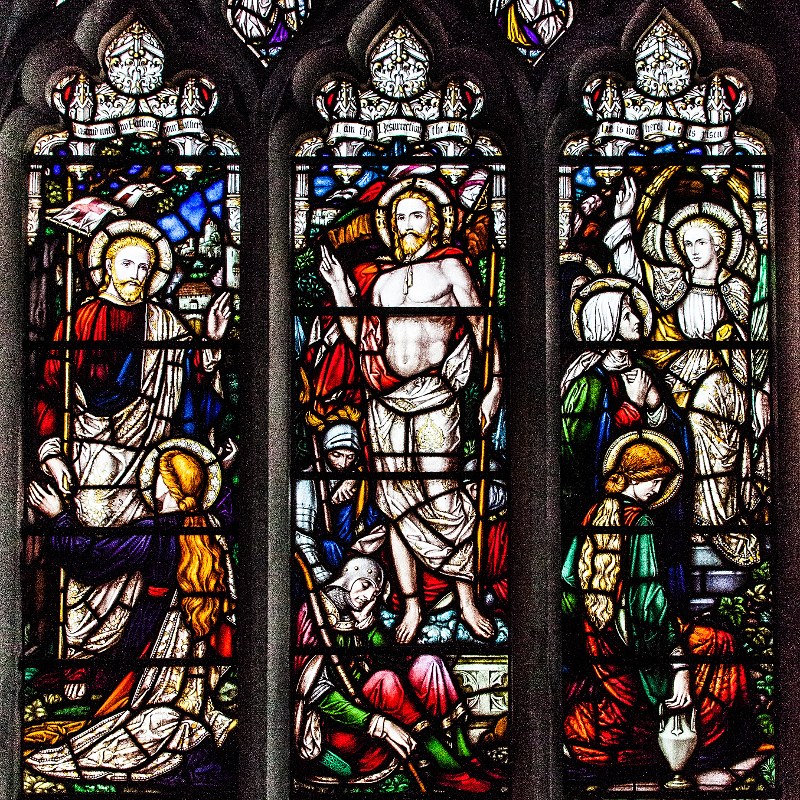 A large window of three lights, with three smaller windows above. In the centre panel, Christ rises from the tomb in glory. Around his feet, the Roman soldiers are still sleeping. Above his head are Christ’s own words: “I am the Resurrection and the Life”. In the left-hand light, Christ blesses Mary Magdalen who is kneeling before Him. He carries a staff from which flutters a pennant marked with a cross in red….The scroll above his head reads: “I ascend unto my Father and your Father”.

The right-hand light shows the angel greeting the Three Marys. His garments are white and he carries the palm of victory. Mary Magdalen kneels before Him, with her jar of oil. Behind her, the Virgin Mary stands in profile, looking at the angel, hands clasped on her breast. Behind her again, there is a glimpse of the third Mary. The words of the angel appear above in a scroll: “He is not here, He is risen”.

The small panels above show Christ the King and two angels in adoration.

This window is particularly remarkable for its vibrant colour contrasts and for the Pre-Raphaelite depiction of Mary Magdalen in the right-hand light. The Risen Christ and the Roman soldiers in the centre panel strongly resemble the same figures in the St Brelade’s Church Resurrection window.

A double window. The left-hand light depicts Christ, crowned with thorns and holding a reed in his hands which are tied with a rope. The scroll says: “Behold the Lamb of God”. On the right, St John the Baptist stands holding a wooden staff topped with a cross. He looks across to Christ and points Him out with his right hand. Above him are the words: “Which taketh away the sins of the world”. The two figures are placed against a deep green curtain edged with gold braid. Their heads and halos are surrounded by areas of clear glass which is unusual in a Bosdet window.

Above the two lights, there is a small panel of glass depicting a golden chalice, surrounded by a scroll bearing the words: “The Blood of the Lamb”.

The portrayal of Christ resembles the figure of Christ painted by Bosdet in the large oil dated 1897 which was discovered in a storeroom at St Saviour’s Church, Sunbury on Thames, and brought to Jersey and restored by The Glass Rainbow Trust